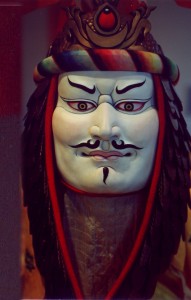 Gesar of Ling, one of the four main ancestral sovereigns of Shambhala, represents the quintessence of the Tibetan warrior tradition—an enlightened being who took birth as a Buddhist warrior king to defeat the enemies of the dharma. He is both guru and protector, as well as the ancestral spirit of the Mukpo clan. As the Vidyadhara Chögyam Trungpa Rinpoche explained, “Warriorship here refers to realizing the power, dignity and wakefulness that is inherent in all of us as human beings. It is awakening our basic human confidence which allows us to cheer up, develop a sense of vision and succeed in what we are doing.” In this context, the meaning of warriorship transcends any idea or expression of aggression.

While our Shambhala texts themselves barely mention Gesar by name, they are replete with the imagery and teachings found in The Epic of Gesar, the largest existing oral epic in the world. Within the epic, discussions on windhorse (lungta), authentic presence (wangthang), enriching presence (yang), confidence or dignity (ziji), and the principles of lha, nyen, and lu abound. The Vidyadhara explained that “we can regard the entire story as a display of how the warrior’s mind works. Gesar represents the ideal warrior, the principle of all-victorious confidence. As the central force of sanity he conquers all his enemies, the evil forces of the four directions, who turn people’s minds away from the true teachings of Buddhism, the teachings that say it is possible to attain ultimate self-realization.” References to warring, frequent in the Gesar literature, also appear in the Shambhala texts where the enemies of the dharma, the evil forces of the four directions, are nothing other than the personification of our own internal battles.

At the first Kalapa Assembly in the fall of 1978, during one of our translation sessions with the Vidyadhara, Larry Mermelstein engaged him in an interesting discussion about the nature of the Shambhala texts he was presenting to us. When asked whether they were terma (“treasure teachings” hidden long ago to be discovered at an appropriate time in the future), he replied, “Yes, sort of.” When we asked whether we should include the terma mark to indicate terma in our translations, his response was, “Not yet; maybe later.” In fact, this did not come to pass until after his death, when Dilgo Khyentse Rinpoche instructed us to include this in our future publications of these texts, and he confirmed with no hesitation that they were indeed authentic terma.

When we asked the Vidyadhara whether these texts originated with Padmakara, the source of the vast majority of treasure teachings, at that time we didn’t know that other teachers also hid dharma as termas. So when Rinpoche replied that these texts were more likely from Gesar, we were understandably puzzled. But after a long pause Rinpoche added, “And of course Gesar was an emanation of Padmakara, so that should take care of things for you!” When we asked about what meaning Gesar had in terms of the Shambhala teachings, Rinpoche exclaimed: “Gesar is the vanguard of Shambhala.” (It should be noted that in other contexts, the Vidyadhara indicated that the Shambhala terma had originated with the Rigden kings, Shiwa Ökar, or Gesar of Ling.)

During the visits of His Holiness the Sixteenth Karmapa and Dilgo Khyentse Rinpoche in the ’70s and ’80s, at the Vidyadhara’s request the Shambhala community received various empowerments of Gesar of Ling. As a community, we practice “The Long Werma Lhasang, called The Warrior Song of Drala,” which was composed by Mipham Rinpoche. This is a purification ceremony using juniper smoke to invoke Gesar as the embodiment of basic goodness, which we do to commence important Shambhala holidays and gatherings. After the Vidyadhara’s death, the Gesar protector chant, also written by Mipham Rinpoche, was introduced by Dilgo Khyentse Rinpoche and was first practiced by the leadership of the Dorje Kasung. 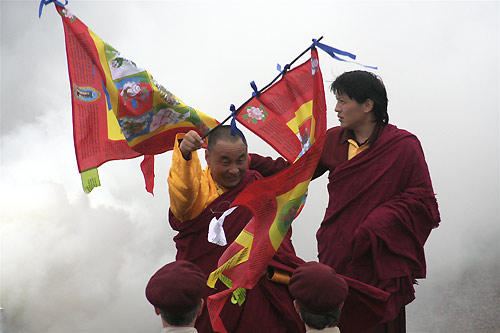 Karme Senge Rinpoche and Lhunpo Rinpoche at the lhasang for the wedding of Sakyong Mipham Rinpoche and Khandro Tseyang. Photo by Michael Wood

With the marriage of Sakyong Mipham Rinpoche and Semo Tseyang, the presence of Gesar of Ling is becoming even more evident in our community. Their wedding ceremonies in Halifax this year introduced us to Namkha Drimed Rinpoche, father of the bride, and a well-respected Nyingma lama and tertön (revealer of treasures), who receives terma specifically about Gesar. The wedding events included an enriching empowerment of Gesar of Ling, bestowed by Namkha Drimed Rinpoche from among his own termas. At the conclusion of the empowerment, he also conferred the reading transmission for a Gesar supplication that the Vidyadhara had composed in Tibet at his request, as well as a short Gesar biography written by Dilgo Khyentse Rinpoche.

This Gesar text by the Vidyadhara, entitled The Ocean of Play of Buddha Activity: A Daily Supplication to the Warrior Gesar, the Great Being Döndrup, King of Werma, Tamer of Enemies first came to our attention in the fall of 1994. The Sakyong, traveling with a small group, met with Penor Rinpoche at Namdroling monastery in southern India in order to prepare for the Joining Heaven and Earth ceremonies the following year. At that time, several of us received the reading transmission of this text from Lama Pema, a very old man from the Tsawa Gang region of Kham, home also to Lady Könchok Paldrön, the Sakyong’s mother. Two years later, we received another edition of this text when Namkha Drimed Rinpoche was present at a teaching program conducted by Thinley Norbu Rinpoche in California. This provided the impetus for Robin Kornman (our own Gesar expert), working with Lama Chönam and Sangye Khandro, to prepare an initial translation. But much work remained, and it was hoped that we would be able to review this text with Namkha Drimed Rinpoche, who had originally requested the text in 1958.

This June, we were able to meet with Namkha Drimed Rinpoche, along with his son Gyetrul Jigme Rinpoche, and review Robin’s translation in some detail. We had additional meetings with Lama Ngodup Dorji in July and with Jigme Rinpoche during his second visit to Halifax in early August. Of course, these teachers of the Gesar tradition were all immensely helpful and knowledgeable, and we look forward to working together in the future. 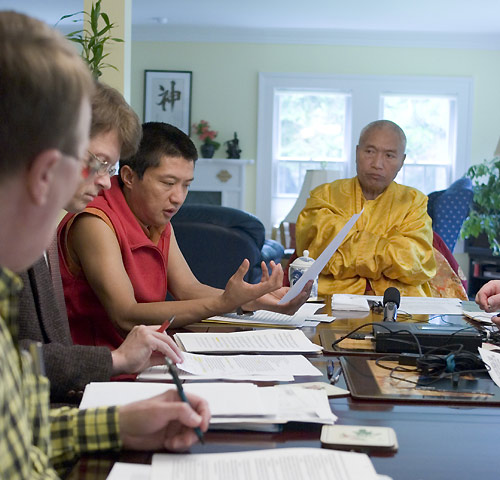 During our meeting with Namkha Drimed Rinpoche, we asked him to tell us more about how he met the Vidyadhara and came to request the Gesar text from him. Here is some of what he had to say:

In July and August of 1958, I attended the Rinchen Terdzö empowerments that Trungpa Rinpoche was giving at Yak monastery in Tsawa Gang. That was the first time I met Trungpa Rinpoche. I already had a very personal connection with Gesar. I had received some Gesar terma teachings, but they were not complete. Realizing that Trungpa Rinpoche was a great master and also had a very special connection to Gesar, I asked him to write something for me. He immediately wrote down the Gesar supplication, The Ocean of the Play of Buddha Activity. After the text was copied, he sealed the original and presented it to me.

During the empowerments, we were occasionally able to talk about our drala, werma, and Gesar visions. Since I was young, I have been guided by visions of Gesar in various forms. Whenever I received prophecies, Gesar was in the form of a young boy dressed in white. I knew that this boy was an aspect of Gesar, but did not know his name. As soon as I mentioned this to Trungpa Rinpoche, he identified the boy as Akar Werma. Today, whenever I perform a Gesar arrow divination, I base it on the Akar Werma sadhana.

At one point during the empowerment, I was not well for a few days. Trungpa Rinpoche came to visit me and blessed me with a very beautiful phurba. The phurba, twelve inches long, was a terma that Trungpa Rinpoche used for special blessings. A few days later, I was fully recovered.

At the end of the empowerments, Trungpa Rinpoche told me that times were changing and that many uncertainties were approaching. There were already Chinese intrusions in the area of Surmang, but my own monastery was still quiet. Nevertheless, Trungpa Rinpoche was very clear that things were about to change. He said that he had to return to Surmang at least one more time, but that he would soon leave again—this time not in monk’s robes, but in the dress of a lay person. After presenting me khatas and offerings, he asked me to give him my blessing and to pray for the success of his journey.

In 1959, I left my monastery with my family and a group of monastics. It was a difficult journey, because we could not travel on the established routes, which were being watched closely by the Chinese. I devised our escape route through gorges and mountains, based mostly on Gesar prophecy and arrow divinations. During our escape, Trungpa Rinpoche and I met at Nyewo and conferred to confirm the safety of our route. Trungpa Rinpoche used mirror divination, and I used arrow divination, but the results were nearly the same. We decided to follow the route through Trakke, which has very harsh terrain and difficult gorges to pass through.

Trungpa Rinpoche and I met again on the plateau of Rigong-kha and consulted with one another. We thought about joining our two groups, but decided against it. Since I was leading a group of about a hundred people and Trungpa Rinpoche had an equal number or more, traveling together would have been very difficult and dangerous. However, Rinpoche’s mirror divination indicated that we would arrive safely in India, no matter which route we took.

Trungpa Rinpoche took the route along the Kongpo mountain range and eventually escaped through the region of Pemakö. I followed the water route, which was easier but longer, because there were more old and infirm people in my group. At one point, we were captured by the Chinese. As we were dressed as ordinary lay persons, no one could tell who was a lama or a leader. For some reason, the Chinese left my family alone, but sent everyone else back to Kham. This was truly a miracle. The fact that my entire family was able to escape together was only possible through the grace, power, and blessings of Gesar.