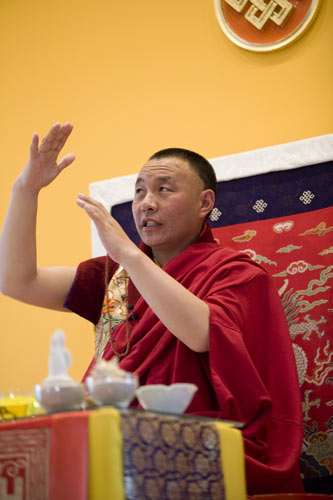 This spring, the Vidyadhara’s nephew, Karma Senge Rinpoche, returned to Canada for the fourth time to teach and translate with us. The focus this time was on a very important transmission:The Sadhana of Nonmeditation: A Practice of No Activity, Drawn from “The Heart Treasure of Samantabhadra”—an ati terma discovered by the Vidyadhara in Kyere, Tibet. From the start, we shifted into a higher gear all around. We had translated and compiled all the liturgies and commentarial texts we thought necessary before the visit began, working for nearly two months last winter with Surmang Khenpo. However, soon after Rinpoche’s arrival we discovered that there was much more to translate, and we completed new drafts of all the most essential pieces in a matter of days, completing two publications (sadhana and practice commentary) just in time for the program. For more on our work with Karma Senge Rinpoche, please see Projects: 2007.

We thought you might appreciate a different voice in reporting on this empowerment, and so we asked a good friend and writer, Denny Blouin, to put his mind and heart and hand to this.

The Avalokiteshvara Abhisheka, Halifax, May 2007

Receiving this abhisheka and listening to the stories that Karma Senge Rinpoche told us of the Vidyadhara’s youth in Tibet transformed for me what we have known about the history of the Vidyadhara’s entire life and the significance—the urgency of his teachings. Speaking as a student of Trungpa Rinpoche, until Karma Senge came to North America in 2003, I was not accustomed to thinking of Chögyam Trungpa’s “miraculous” aspects. Yes, there were the occasional stories like an over-the-speed-limit OM AH HUM under the radar of a Colorado state trooper, or dinner place settings for Vajrayogini at Mill Village, but in general Rinpoche never talked much about miraculous powers or wondrous events. In fact, he pooh-poohed them as relative siddhi; the point being to realize the supreme siddhi of wisdom in this lifetime, and he kept encouraging us, “You can do it, sweetheart.”

Of course, there are hints of such power and action in places like Ocean Waves of Devotion: A Supplication to the Surmang Trungpa Rinpoches, where, even at age ten, he is likened to Künga Lekpa, the Mad Yogin of Bhutan; in Born in Tibet where he divines escape routes through a wilderness of snow peaks and jungles; or in James George’s story of Rinpoche in New Delhi in 1968 “looking intently into a small circular metal mirror of the Chinese type and describing Shambhala as if he were looking out of the window.”

From the distance of print and secondhand story all of that is relatively comprehensible. But now it comes as a mind-bending surprise to hear—not just to read—of his activity as a tertön in Tibet, receiving and uncovering both earth and mind termas on Kyere Shelkar mountain, at the place Padmasambhava named Luminosity Sky Palace, declared by him to have more blessings than other sacred pure lands.

Trained as the first generation of Trungpa Rinpoche’s students, we were taught to cut through the “love and light” and “magic and mystery” attributed to Tibetan Buddhism, and to come down to earth and perceive ordinary magic. Because of that, his actions as a child tertön challenge our practiced skepticism. But what he did was actual, witnessed fact in the original meaning of that word: thing done.

Over the course of the abhisheka, Karma Senge Rinpoche told us well-kept stories of Trungpa Rinpoche as a young tertön. For six days, Surmang monks excavated solid rock to an arm’s-length depth at a site Rinpoche had specified to uncover terma caskets. Another time, during an event that adds a whole new dimension to the request, “Please approach,” accompanied by other lamas doing a feast in the Crystal Cave of Vajrasattva on Kyere Shelkar, Rinpoche recited the “Seven-Line Supplication” at dawn, then waved an arrow, and as the attached scarf touched the cave roof, treasure caskets “poured down.”

At still another time when Rinpoche was at Kyere monastery, during a group ganachakra practice, again at dawn, he encountered Ekajati “face to face.” She with her big spike topknot, single breast and fang, her heart-eating Mahakala face, wasp-waist and skull garland, she “with a terrifying roar of laughter, amidst swirling fire and wind, red and black, placed in his hand a treasure casket, which on the following day opened by itself.” That treasure contained a practice of Ekajati; sadhanas of the guru, yidam, dakini, and dharma protector; prophecies about the future, and this very profound Avalokiteshvara sadhana, which includes a method of practicing effortless nonmeditation.

In The Sadhana of Nonmeditation: A Practice of No Activity, we have what Robin Kornman (who made a very special effort to attend) called, “a culminating piece of Trungpa Rinpoche: as if he built a pyramid and there was a square at the top that we have been missing and this is the crystal square at the top, an ati (dzokchen) practice of Avalokiteshvara.” The power of this short, pith practice is that it binds emptiness to compassion and demonstrates it—in fact, it is the experience of both arising together, spontaneously, effortlessly. That it appears now, twenty years after the Vidyadhara’s parinirvana, is certainly not random coincidence, and I can imagine a sly smile now haunting the Vidyadhara’s lips as he alone knew what he’d left behind. And what was coming:

In the final difficult five hundred years,
There will be no time to do a practice involving effort.
Even practicing will be a great risk for one’s life.
Therefore, you should practice ati, effortlessness.

By the time Trungpa Rinpoche received this terma in 1958, simply to be seen reciting mantras or using a mala, let alone practicing meditation, had become crimes in regions of Tibet the Chinese had conquered. Thus only the effortlessness of ati would be an undetectably safe practice, which may explain why his teacher Khenpo Gangshar broke the traditional mold for dzokchen transmission by giving it publicly to large gatherings.

At “great risk for one’s life,” the risk taken by disciples to preserve these texts, and the risk the Vidyadhara’s nephew took to find and save them. Therefore, when Karma Senge Rinpoche enters a shrine room and sits on a throne, that risk-of-life generosity and his achievement are palpable. In the presence of this trim, middle-sized man with inquisitive eyes, soft-spoken authority, and accomplishment, we did become very “fortunate ones.” 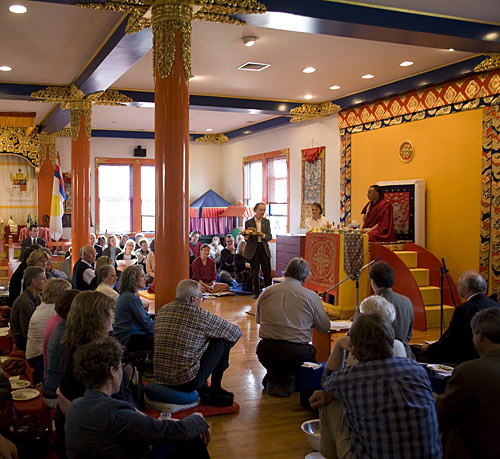 All 240 of us, packed quite tightly into the shrine room in what came to feel like a family gathering of the Vidyadhara’s sangha, still sharp, soft, salty, vital, quick with questions and service. But coming just three months after Molly Nudell’s Sukhavati, and with Robin sitting with many of us for the last time, sartorially ever-resplendent, but walking with a cane and nodding off due to medication—a life-risk decision to attend—the weekend cut two ways, with both a sense of loss and urgency. Loss in the sense that seats in the shrine room are now open, as the foundation generation of the sangha begins to lose its members more frequently. But at the same time, when Jessie Litven, 26, took her seat as an oral translator and began to learn on the job in front of us all, clearly a hot torch was being passed.

Having practiced this sadhana for only a few months, I am slowly coming to understand more exactly, more urgently than ever before how “Fulfilling the Aspirations” of the Vidyadhara is an act that comes from, as the Vidyadhara says, “compassion, known in Tibet as the noble heart, that is to say the magnetic or the moving quality of enlightenment. . . . This idea of compassion is in fact the warmth within enlightenment. Enlightenment must have warmth, this willingness-to-do-everything. And that willingness, that being-ready-to-move, is essentially what Avalokiteshvara represents. . . . Avalokiteshvara is not something outside yourself to which you pray—he is your compassion and part of you.”

In memory of Robin Kornman.