Mahamudra is ultimately indefinable, indescribable. Nevertheless, for generations teachers have guided students who have themselves become teachers, who have guided yet more students in the ways of mahamudra. In that spirit, we would like to share a few very profound and pithy excerpts on the subject of shamatha meditation as expressed by the mahamudra lineage. These are connected by the unbroken garland of precious lineage holders and masters of the tradition. By looking at some of the translation issues surrounding these pieces and delving into the dharma itself, we can feel the lifeblood of this tradition continuing today. We hope you enjoy this food for thought, or nonthought, as the case may be. 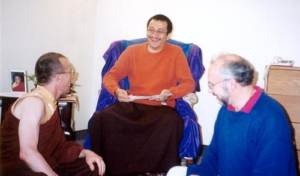 The first is from the “Mahamudra Aspiration,” a very direct and succinct exposition on mahamudra meditation in the form of an aspirational supplication, written by the third Gyalwang Karmapa, Rangjung Dorje, in the early 14th century.

The second is the stanza on shamatha from the famous “Supplication to the Takpo Kagyü,” composed in the 15th century by the lineage holder Pengar Jampal Sangpo, who was a student of the sixth Karmapa, Thongwa Tönden. Jampal Sangpo wrote this supplication at the end of 18 years of retreat as the expression of his understanding and realization. Many teachings and commentaries on this supplication have been given as it expresses the entire path in a very concise and devotional summary.

The third excerpt is from the ninth Karmapa, Wangchuk Dorje’s teaching on mahamudra meditation, entitled Dispelling the Darkness of Ignorance, which he wrote in the 16th century. This excerpt is from our translation-in-progress, from the section on shamatha, and combines images and language—unaltered freshness and a calm ocean without waves—from the two previous compositions.

While we were preparing a translation of Iron Hook of Compassion, a phowa text by Karma Chagme, Venerable Thrangu Rinpoche suggested we include several long aspirations, including the famous “Mahamudra Aspiration” by Karmapa Rangjung Dorje (1284-1339). Although we had published a translation of the “Mahamudra Aspiration” twenty-five years earlier, we decided to revisit our work and prepare a new translation for publication with the phowa materials.

The distribution of the phowa text was highly restricted, being available only to practitioners who had already completed individual phowa practice in a six-dharmas-of-Naropa retreat. However, word soon spread that we had published a new translation of the “Mahamudra Aspiration,” and many people—especially members of our sangha who are engaged in the study and practice of mahamudra— expressed an interested in using it. As the aspiration includes pith instructions on shamatha and vipashyana meditation—topics widely discussed these days—we offer this translation to you.

This aspiration was one of the first projects the Translation Committee worked on with the Vidyadhara. In 1976, it was published in Empowerment, a book that documented the first American visit of His Holiness the Sixteenth Karmapa. One of our members, John Rockwell, later prepared a revised translation, which he used when translating oral teachings on the text by Thrangu Rinpoche. In preparing our latest version, we consulted a number of translations by other translators: Garma C.C. Chang, Lama Sherab Dorje, Rosemarie Fuchs, Ari Goldfield, Matthew Kapstein, Ken McLeod, and Erik Pema Kunzang.

Comparing different English translations of the same Tibetan text can yield interesting insights. Recently a friend stopped our minds when she asked, “But how do I know which translation is right?” Constantly absorbed as we are in translating, we don’t always step back and consider the process itself. Of course, this was a fair question. She wanted to know, as accurately as possible, what the Tibetan words meant–the breadth and subtlety of meaning the words would convey to a native Tibetan speaker.

The answer to her question is not simple. Because translators often rely on commentary by a Tibetan lama who thoroughly knows the text, translations rarely miss the meaning completely. The problem—and wealth of possibilities—arises from the fact that the Tibetan language is often terse in expression, and its meaning needs to be “unpacked” by relying on commentaries and, sometimes, commentaries on commentaries. Therefore, one verse in Tibetan can fairly and correctly be translated in a variety of ways. So which is the “right” one? Often it is the one that strikes the heart with the greatest resonance.

Here is a sampling of alternative translations of verse sixteen on shamatha from the “Mahamudra Aspiration”:

Although the choice of words may differ, the logic is clearly the same in each of these examples. The first two lines of this verse refer to one of the two principal obstacles to shamatha practice: göpa, mental agitation or wildness. To accomplish shamatha, first our thoughts—both coarse and subtle—need to be calmed. But this does not occur due to some exterior force or agency. It happens rang sar, or literally, “in its own place.” In other words, it is an inner process that develops naturally or spontaneously by itself. Once thoughts—here likened to rough waves on water—have settled down, mind becomes more like a gently flowing river, with little disturbance from waves.

The third line of verse refers to the second principal obstacle to shamatha, ching-muk, which can be likened to the mud that collects at the bottom of a clear pond. Ching-mukhas two aspects: chingwa and mukpa. Chingwa can be translated as “sinking” or “drowsiness”; mukpa means “darkness” or “dullness.” Once the mind becomes somewhat settled, dullness or lack of clarity becomes a more serious problem. At this point, there is a danger of falling into a state of mental blankness or stupidity, without the clarity and precision that is required for vipashyana, or clear seeing. This is precisely what Milarepa warned against in his song, “Aspiration of Commitment”:

May I not be attached to the pond of shamatha,
And may the flower of vipashyana bloom.

In the concluding line of verse sixteen, we ask for the complete fruition of shamatha, a mental stability that is like the unmoving calm of a great ocean.

Supplication to the Takpo Kagyü

In looking at revisions of the Daily Chants for gender-inclusiveness, we revisited a number of points of dharma where we may have had doubts concerning our previous translations. A few of these nagging questions remained concerning the “Supplication to the Takpo Kagyü,” composed by Pengar Jampal Sangpo. However, since this chant was translated with the Vidyadhara and since it is so ingrained in the hearts and tongues of practitioners, we were loath to make any changes in it unless absolutely necessary. In looking at this famous supplication again, we consulted two commentaries, a contemporary one by Thrangu Rinpoche, known as Showing the Path to Liberation, and an older one by Genpo Tsepal, called Oral Instructions of the Lord Guru: An Explanation of the Short Supplication to Vajradhara.

In particular, the important fourth and fifth stanzas deal with the primary topics of shamatha and vipashyana meditation. In the fourth verse on shamatha, “Awareness is the body of meditation . . . ,” the second line has two different readings in the Tibetan. The Tibetan definitely says, “Whatever arises . . . is fresh”—so far, so good. But various editions of the Tibetan differ in their spelling of one crucial word (both pronounced “tok”), one meaning “realization” and the other meaning “thoughts.” So the remainder of the line can be translated either “the essence of realization” or “the essence of thoughts.” The former reading is reflected in our current translation, “Whatever arises is fresh—the essence of realization,” and the latter would read, “Whatever thought arises, its essence is fresh.” 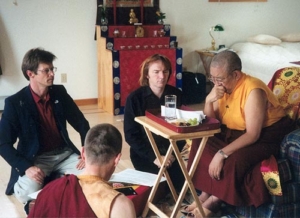 Previously, this difference had been noted to the Vidyadhara, and we had consulted with Thrangu Rinpoche as well. To express it as the Vidyadhara did in his original translation done in Paro, Bhutan (1968), “Whatever thought arises, its nature is nowness,” is to emphasize that no matter what thought occurs in the mind during meditation, we just leave it as it is. Or in the words of Genpo Tsepal, “The essence of whatever thought arises is freshness; without altering it in the slightest, rest relaxed in just that.” In his own commentary, Thrangu Rinpoche also followed this reading of “tok” as “thoughts.”

In 1980, when completing our current translation, we presented the different variations of the Tibetan to the Vidyadhara. Together with him, we chose to go with the alternative reading of “tok” as “realization.” Later, when we pointed out to the Vidyadhara the likelihood that we had chosen the less favored Tibetan reading, he felt that in essence either reading was all right and it was fine to leave it as we had re-translated it. Twenty years later, we are definitely older, and perhaps a bit wiser, so we would like to offer an alternative translation and commentary for you to contemplate.

From Showing the Path to Liberation
By the Venerable Thangu Rinpoche

The Main Practice:
Pointing Out Shamatha

This is taught by the following verse:

Awareness is the body of meditation, as is taught.
Whatever thought arises, its essence is fresh.
To this meditator, who rests simply without altering it,
Grant your blessings so that my meditation is free from conception.

Thus, having completed the practice of the preliminaries, meditating one-pointedly withawareness of outward distractions and inner thoughts is the body of meditation, as is taught in the texts and oral instructions. Whatever thought arises directly, its essence is fresh and unaltered. To this meditator who rests evenly— simply without altering this ordinary mind—without pursuing the past, inviting the future, or inserting anything into the mind of the present, grant your blessings so that my meditation is free from conceptionsthat grasp onto hope that meditation will go well, fear that it will go poorly, thoughts of “I’m meditating” or “I’m not,” the object of meditation, the meditator, and being scattered and wild, or drowsy and dull. This teaching is the pith instruction on the way of shamatha meditation.